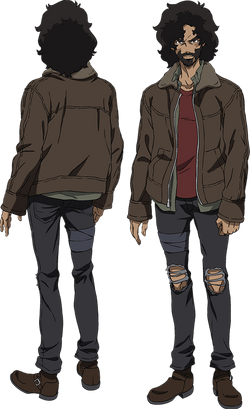 Episode One, Chapter One

Joe (ジョー) is the ring name of the main protagonist of the anime, Megalo Box. Previously known as Junk Dog (ジャンクドッグ), his real name has yet to be revealed. He used to make a living by throwing matches underground with Gansaku Nanbu.

After meeting the Megalonia champion, Yuri, he did everything to enter the Megalonia and fight the champion under Team Nowhere. His ring name became "Gearless Joe" after he fought his first opponent without using a gear, and this becoming his signature way of fighting in the ring. Eventually he fights against Yuri, managing to get a KO in the thirteenth round.

Instead of staying as the Megalonia champion, Joe left the ring and stayed together with Sachio in Nanbu's vegetable farm behind Gym Nowhere.

Joe is a relatively tall young man with dark olive skin, sporting his signature black hair and thick eyebrows. He's on the muscular side, with a horizontal scar from his right jaw to his cheek, later joined by a horizontal scar on his left cheek, gained from one of his matches. He also has X-shaped scars, one on his right pectoral, the other on his lower left abdomen, two more, one on his left shoulder while the other is on his right outer forearm.

Outside boxing matches and before he retires from Megalonia, Joe is typically seen wearing a green military jacket with an army badge on his left, above a stop-sign like patch. He wears a dark red short-sleeved shirt and skinny pale pants with knee guards, orange lines on either outside seam and parting a bit above his ankles. He also wears what seem to be a variation of brown combat boots, and a turquoise belt with a silver-colored buckle around his waist.

During his megalo boxing matches, Joe wears the same pants - the only change in his outfit being the removal of his jacket and shirt, and changing into black boxing boots with a navy tint. He used to wear dark Gear with a few orange strips of metal tied back together with an adhesive material, connected to a pair of red boxing gloves which would later change to normal boxing gloves once he entered Megalonia, entering without Gear; the source of his epithet, "Gearless."

During the events of Megalobox 2: NOMAD, Joe sports a beard (presumably to hide his identity) and a disheveled new look. He has now gone back to utilizing his gear that now has his new monicar "NOMAD" etched to the back of it. He also appears to be weaker due to his new found painkiller addiction.

Overall, Joe is a rather laid-back character, rarely being angry or upset during his screentime. Despite his casual and easygoing demeanor, however, Joe becomes particularly determined and spirited when in the ring. He's steadfast when it comes to achieving his goals and has gone as far as denying his coach's plan of approach for the sake of following his own philosophy and mindset to win the match in his own way.

Joe prefers to show all he's got rather than hold back and give false information on his capabilities, fighting in boxing matches just for the sake of finding a good opponent and fighting the hardest he can. His perseverance and nigh persistence during fights, as well as his tenacity, has been what has helped him out or literally saved him during matches, being what makes him get up and keep going in the end.

He's particularly good at reading others' emotions and gauging how they'll respond to something he says or does - this is especially prominent during Megalo Boxing matches when he studies his opponent carefully and is able to respond to attacks and fake-outs accordingly.

Joe seems to hold little interest in whatever fame and reputation he's built for himself because, as stated before, he fights for the sake of a good fight against strong opponents. He doesn't really look twice at whatever his ring name has earned in terms of superficial rewards.

Not much is known about Joe's backstory or history - even his real name is left unknown. The most concrete information is that he has a past with Nanbu and was probably doing underground Megalo Boxing for at least a year prior to the beginning of the story. In addition, prior to working with Nanbu, Joe did boxing matches in the slums in exchange for money. He would sleep from temporary bed to temporary bed every night.[1]

It should be noted that the three-layered arrow badge on Joe's jacket is almost always an indication of the army position of sergeant, so it's likely that either he or someone close to him that gave him that jacket was a sergeant. His scars which he had prior to the start of the show could possibly be from a previous military career, but seeing as Aragaki left the army ten years ago, and assuming whatever war or battle he was participating still continued after that, it may be a rather outlandish guess to claim that Joe was in the military. However, if this conflict is still ongoing or ended relatively recently, again, it is possible he held the position of sergeant.

Another source of Joe's scars, however, could simply be fights he started or challenges he accepted before Nanbu found him.

They are unparalleled by anyone else