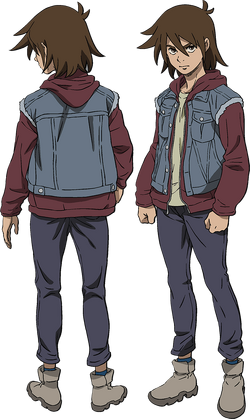 Sachio (サチオ) was the information gatherer and chief mechanic of Team Nowhere. He first appears as a troublesome child who stole mechanical parts with his friends and gave them to a mechanic in exchange for candy and/or small change.

After Joe saves him from the mechanic, Sachio begins to follow him and Nanbu around before officially joining Team Nowhere after the other two stated that they were going to enter Megalonia.

Sachio's father was originally a brilliant engineer who worked for Shirato Group and later died, making Sachio an orphan with a grudge against the Shirato. He then grew up in the forbidden district with the other street children (Bonjiri, Santa, Oicho) making a living off selling stolen goods and buying red "candy".

After the events of Season 1, Sachio lives at Gym Nowhere with Joe and Nanbu. When the tsunami hits the river, Sachio moves to an orphanage run by Yukiko Shirato. 5 years later, he becomes a Megaloboxer in Fujimaki's underground ring.