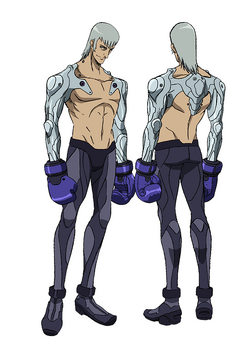 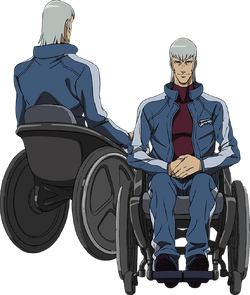 Yuri (勇利) is the champion of Megalonia, serving as somewhat of a main antagonist and main rival of the protagonist, "Gearless" Joe. He is the main boxer of Team Shirato and is known as the greatest boxer in the Megalonia due to his status as the boxer ranked in first. He is called the "King of Kings," and wore the latest gear of the Shirato Group until he resigned his position in order to have his gear removed and fight Joe. At the end he is unable to walk, due to his loss of stamina.

He seems cool and only into himself at first. He refused to acknowledge joe and looked down on him. He showed loyalty to Yukiko as she helped him in the past however chose to betray her dreams as saw his more important. As Joe started to make his way up he showed respect to him and even supported him in the fight to qualify for finals.

He never refused to acknowledge or look down on others. He just chose to put that appearance on to drive the fight out of others. If you watched the final episodes he talks about how lucky he is to have found someone he truly wants to fight. He also decides not to pummel Joe within an inch of his life at the start even though he could and gives him a handicap while doing so. He then risked his life to have a fair fight with Joe.

Yuri is a towering, broad-shouldered figure, standing 6'5 and tends to don sleek, skin-tight clothing in shades of maroon. Beneath his clothing though is a sleek set of silvery gear with purple accents that has been surgically-grafted to his body.

Yuri has a frosty appearance that contrasts strongly with his preferred clothing, with slick silver hair that terminates in pointed bangs that covers his forehead and hangs down in a short mullet over his neck. His face is rather streamlined, with a straight, thin nose, pronounced brow, and most strikingly, a pair of bright purple eyes. Much like how Joe is compared to a stray junkyard dog, Yuri is extremely wolf-like in both his aloof and unreadable bearing and his dangerous yet refined appearance.

Not much is know about Yuri's past, other than the fact that he was taken into the Shirato corporation as a young man, wherein he met Yukiko Shirato.

We learn more about Yuri’s past in the short OVA where we see him visiting his former coach after the final fight. He used to live in the slums, often picking fights before he was taken in by a man who saw in him natural talent for boxing. The man then became his coach and taught him about boxing.

Shirato corporation, interested in his abilities then recruited him. Yuri was reluctant at first, but he eventually accepted the offer.

In the years after Megalonia, Yuri trains Liu